Paraphrase a sentence from this paragraph

Four years ago, Stacy Snyder, then a 25-year-old teacher in training at Conestoga Valley High School in Lancaster, Pa., posted a photo on her MySpace page that showed her at a party wearing a pirate hat and drinking from a plastic cup, with the caption “Drunken Pirate.” After discovering the page, her supervisor at the high school told her the photo was “unprofessional,” and the dean of Millersville University School of Education, where Snyder was enrolled, said she was promoting drinking in virtual view of her under-age students. As a result, days before Snyder’s scheduled graduation, the university denied her a teaching degree. Snyder sued, arguing that the university had violated her First Amendment rights by penalizing her for her (perfectly legal) after-hours behavior. But in 2008, a federal district judge rejected the claim, saying that because Snyder was a public employee whose photo didn’t relate to matters of public concern, her “Drunken Pirate” post was not protected speech.

- First Paragraph from the article "The Web Means the End of Forgetting." 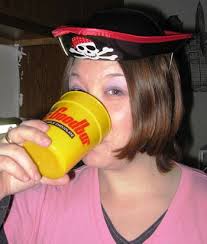